To customize Nimbus according to your country and city specific requirements you can add cities on the City screen. All defined cities will be visible in the City drop down menus of Customer, Supplier, Store Definition, and City Area screens.

To access City screen, from the main menu select Configuration>City. 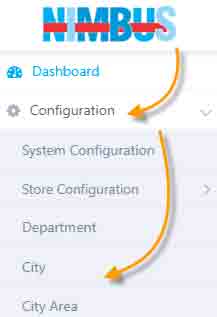 Enter the name of a city in the City Name field.

Enter a Code for the city in the City Code filed.

If you want to, give it a Sort Order number.

Enter Comments if you want to.

Once you have entered the required information for a particular city, click Save.

Similarly, define all the cities you need to define in the system. All defined cities will appear in a list view on the Records tab. 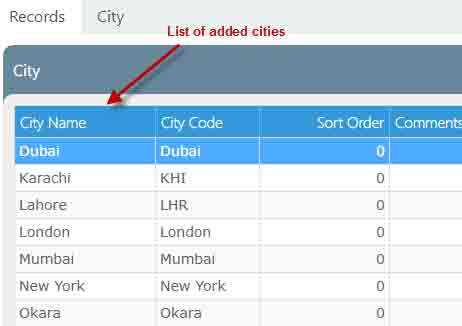 To delete a record of any city, select the city from list view by double clicking on the selected city row. Then click Delete to delete that defined city.

Note: If you have already attached a city to customers, suppliers, shops or city areas on the relevant screens, the system will not allow you to delete the city record. You will get the message ‘You are not allowed to delete this record because dependent record exists’.

To update any City record, from list view select the city whose record you want to update by double clicking on the selected city row. Make necessary changes and then click Update to save added changes.